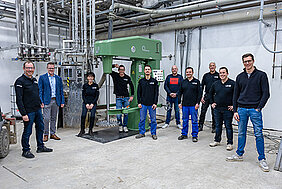 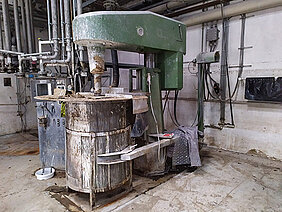 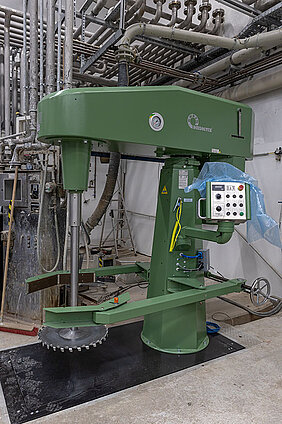 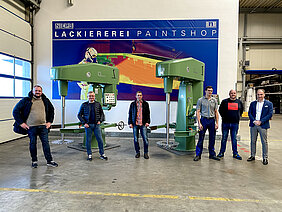 After a call from the Ahrtal – The companies Wilhelm Niemann, Waldbach Logistik, Rokossa and Steinbreder in Melle focus on their competence in order to support non-bureaucratic an affected coating factory in Ahrweiler

Almost six months passed since the flood catastrophe in the Ahrtal. However, the people are still occupied with the clean-up efforts in the flood region. But not only private citizens, which lost their homes, are affected by the flood, but also many companies. The paint and coating producer Jansen was also among them. The complete company site suffered from the flood and many machines were much damaged. Among these machines are also two dissolvers of the company Wilhelm Niemann from Melle-Neuenkirchen, which are already used there for more than 30 years. The large dispersion machines are essential for the paint production and without them the production cannot be started again.

After a call of the company Jansen a Niemann service team drove from Melle to the Ahrtal in order to get an idea of the situation on site. By the traces at the walls, they could well adumbrate the water level during the flood and had to realise that the machines were more damaged than previously expected. The complete electronics were affected by the water. Furthermore, many mechanical components were damaged by the mud, which literally entered into every small groove. Back in Neuenkirchen the plan was developed to take the machines to Melle as fast as possible in order to repair them. Further companies in Melle were quickly found, which were also prepared to contribute their part to the project. The assigned forwarding company Waldbach arranged the pick-up and delivery of the two dissolvers at their own expense. Niemann received further support by the company Steinbreder, which sandblasted various machine parts free of charge. The company Rokossa GmbH took care of the repair of the electric motors, which also contributed their work as a donation. A team from different departments was found at Niemann, which repaired, lacquered and mounted the machines again, mostly in their own free time, in less than two months. The one or other upgrade not only brought the more than 30 years old machines optically, but also technically to the latest state of the art.

On Friday, January 7, 2022, the dissolvers were dispatched to Ahrweiler again, where they were installed by the Niemann service technicians in the following week. Visibly touched Mrs. Alexandra Bardjasteh, owner of the company Jansen, took delivery of the refurbished machines and thanked for the non-bureaucratic and fast support on behalf of the whole company. After more than 440 truckloads were necessary to remove the mud from the company site, the commissioning of the rebuilt dissolvers is another step for Jansen towards normality.

The company Jansen has also written an interesting article about this: https://www.sonderschichtlack.de/starke-unterstuetzung-durch-maschinenfabrik-niemann/