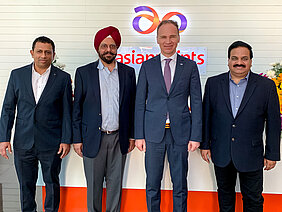 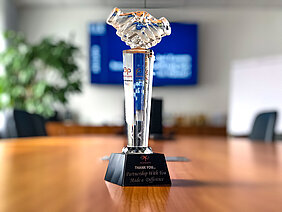 Asian Paints opened the worldwide largest paint and coatings factory in southeastern Visakhapatnam, India, with an inauguration ceremony on February 15, 2019. After numerous KREIS-DISSOLVER®s are already in use in the existing three mega factories in Rohtak, Khandala and Mysore, Asian Paints again trusted in our machines and ordered the super-large-batch KREIS-DISSOLVER®s made in Melle in this project.

As NIEMANN with the KREIS-DISSOLVER®s could be one of the main machine suppliers for all factories, Mr. Frank Niemann travelled to Viaskhapatnam only for this event following an invitation of the management to take part in the inauguration ceremony. He was proud to receive afterwards the award for NIEMANN as especially preferred supplier.

After the official inauguration the impressive production, logistics and filling installations could be viewed during an extensive factory tour. By using latest techniques in all areas highest automation levels could be achieved. The production capacity will first be 300.000 KL per year, and after a planned extension approx. 700.000 KL should be achieved per year. According to the information of the project management this factory will thus be by far the largest paint and coatings factory in the world.